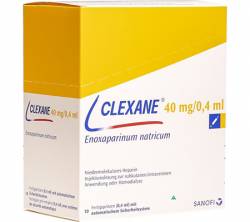 Please login to sign up for product Back in Stock email notifications.

Clexane contains the active ingredient Enoxaparin, which is a type of medicine called a low molecular weight heparin. It stops blood clots forming inside the blood vessels.

Blood clots normally only form to stop bleeding that has occurred as a result of injury to the tissues. The clotting process is complicated and begins when blood cells called platelets clump together and produce chemicals that activate the clotting process. The final part of this process involves a substance called thrombin being activated to produce a protein called fibrin. Fibrin binds the platelets together, forming a blood clot. This is the body's natural way of repairing itself. Sometimes, however, a blood clot can form abnormally within the blood vessels. This is known as a thrombus. It can be dangerous because the clot may detach and travel in the bloodstream, where it becomes known as an embolus. The embolus may eventually get lodged in a blood vessel, thereby blocking the blood supply to a vital organ such as the heart, brain or lungs. This is known as a thromboembolism.

Hypersensitivity to enoxaparin, heparin, benzyl alcohol, or pork products; Active major bleeding; Thrombocytopenia associated with positive in vitro test for antiplatelet antibody in presence of Enoxaparin. The medicine must not be used intramuscularly.

Possible side effects are nosebleeds, bruising, coughing up or vomiting blood, blood in your urine or black, tarry or bloodstained stools, pain and irritation.

If using Clexane with peparations which influence hemostasis it is possible development of hemorrhagic complications. If uses of such combination cannot be avoided, Enoxaparin has to be applyed under the careful control over parameters of blood coagulability. The preparation cannot be mixed with other solutions in one syringe.