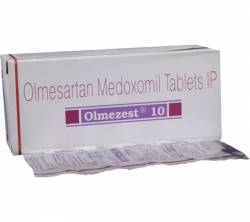 Olmezest is an angiotensin II receptor blocker that is used to treat hypertension in people with high blood pressure who are at risk of cardiovascular disease, to prevent stroke and heart attack. Olmezest lowers blood pressure to normal resting levels, which helps the heart to cope better and reduces the risk of cardiovascular disease and end organ damage. Olmezest can be used alone as monotherapy or in combination with other antihypertensive medication such as diuretics (water tablets).

Olmezest contains Olmesartan Medoxomil, an angiotensin II receptor blocker (ARB), which acts by blocking the binding of the hormone angiotensin II to its receptor in a variety of tissues including vascular smooth muscle (heart and blood vessel walls) and kidney cells. Angiotensin II is a naturally produced hormone that has several actions involved in regulating blood pressure, which is the force needed to pump blood around the body, as well as fluid balance, the amount of water removed from the blood by the kidneys. Angiotensin II causes salt (sodium and potassium) and water retention by the kidneys, and causes blood vessels to constrict (narrow); this increases blood volume while at the same time reducing blood vessel volume, which increases blood pressure. Olmesartan in Olmezest blocks the binding of Angiotensin II to its receptor, preventing its pressor actions (blood pressure increasing) resulting in dilation (widening) of blood vessel and increased salt and water removal by the kidneys into the urine, which together result in lower blood pressure.